Port is the Heart of the Flow of Goods

Most of the goods traffic for Finnish foreign trade passes through the ports of this country. But ports are more than just loading and unloading sites in between different modes of transportation, and the operational model of ports will change radically in the near future. This is the case in Finland’s westernmost port of Kaskinen, too.

The well-designed port of Kaskinen guarantees the safe and cost-effective handling of goods. The diverse and spacious facilities at the port expedite and facilitate handling.
– The loading and unloading of goods between different transports has been optimised for our current clients, but our efficiency and functionality will be improved greatly in the coming years, says Patrik Hellman, the CEO of Port of Kaskinen, Ltd.

Port of Kaskinen is a lively port located in Suupohja on Finland’s west coast, which is connected to highway 8 by main road number 67, and to the national railway network by the Suupohja railway. Good logistics connections have attracted forestry businesses into the area, around which a vital network of enterprises has since developed. Port of Kaskinen is also a TEN-T network port, which means that it is a part of the EU’s trans-European traffic and route network.
– Port of Kaskinen is a relatively young port, with most of it built in the early 2000s, Hellman explains. Approximately 1.1 million tonnes of goods pass through there every year. The port itself employs some 50 persons, and the surrounding industries some 150 persons directly.
– The port’s effect on employment is however actually much greater, if you include all indirect port activities and its clients, Hellman emphasises.

Finland’s and the EU’s climate goals affect all ports in the country. The need to reduce emissions in the port of Kaskinen and on the traffic routes around it will remain on the agenda constantly as port operations and structures are being developed.
– Port processes and operations will be mapped out with different operators and clients over the coming autumn and the following spring. Based on the information we collect, we will develop digital applications that allow us to accurately measure and monitor the various stages of goods handling and the utilisation rates of vehicles, and thus improve port efficiency and reduce emissions. A digital twin of the port will also be created, which will be available to all port operators and clients.
– The twin can be used for example to simulate operations and the movements of ships and machinery in advance, and thereby to optimise and improve the efficiency of operations. The entire system will be integrated into the port management system.
– This will reduce emissions, lower client costs, and improve all port functions significantly.

The Suupohja railway, running through Southern Ostrobothnia and Ostrobothnia from Seinäjoki to Kaskinen, is important for the development of the port and the entire region

Special attention is being paid in Kaskinen to the revitalisation of railway traffic. Port of Kaskinen supports the Southern Ostrobothnia railway association Bothnia Back on Track, which seeks to improve the Suupohja railway in the long term. Association director Jorma Vierula says that renovating and expanding the Teuva loading site is a good start.
– The Suupohja railroad is considered very important for the regional economy of Suupohja and Southern Ostrobothnia. In the last few years, developmental programmes have started which seek to improve conditions and to increase traffic volumes, says Jorma Vierula.

The Suupohja railway is an example of positive development achieved by developmental programmes.
– The number of freight trains on the track has quadrupled from the year 2018 and almost tripled from the year 2019. This growth in traffic is based mainly on the increasing volumes of timber goods being transported, Vierula explains. Updating the Teuva loading site in the summer of 2020 has been calculated to multiply timber transports on the track. The loading site is intended to be used for the loading of timber goods in domestic traffic.

The Finnish Transport Infrastructure Agency decided in late April to continue the Suupohja railway track maintenance until the end of 2022, citing the actual growth in freight traffic as the main reason. The Southern Ostrobothnia railway association thinks this decision is significant for the regional economies of not only Suupohja, but the regions of Southern Ostrobothnia and Ostrobothnia as well. The decision also offers a long-term perspective into the development of the railway.

Jorma Vierula and Patrik Hellman believe that railroads are becoming popular again, which will revitalise cross-traffic as well. A functional railway network is important for the reduction of emissions too, while improving the growth opportunities in the area. Moving traffic from the road onto rails would also support the growth and development plans of Port of Kaskinen.
– We want to ensure that we can maintain our competitiveness, and we are looking boldly to the future and making investments. This includes the development of railroads, Hellman concludes. 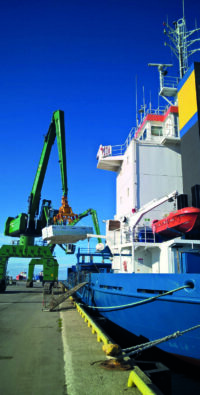