Port of Kaskinen breaks yet another growth record in 2021

International cargo traffic at the Port of Kaskinen grew by approximately 6% from 2021, being some 1,270,000 tonnes in total. There were a total of 387 ship visits in 2021, which is 17 more than during the previous year.
The result for 2021 would have been even better had it not been for the Transport Workers’ Union AKT strike in late December and a three-week Christmas pause in English cargo traffic. The pace of growth was also slowed down by a general shortage of ships during a period of high demand due to COVID-19 and container traffic issues in other ports.

The port company invested approximately 0.8 million euros into the development of port functions in 2021, seeing a 4.2% growth in turnover. The company made a profit of €249,000 after taxes. The systematic development of the port has generated sustainable growth. Cargo traffic at the Port of Kaskinen has increased by almost 100 ship visits and about 400,000 cargo tonnes over the previous four years. The port is exclusively focused on foreign trade.

The railway network reaches all the way into the port area. The vitality of the entire region and opportunities for business growth are being developed by for example increasing the flow of goods in rail traffic. As an example, almost 400,000 tonnes of goods were transported along the Suupohja railway route in 2021. This equals to a growth of almost 300,000 tonnes in just over two years. This clearly demonstrates that there is clear need and demand for railway traffic!

The port predicts that it will grow by approximately 10% during the year 2022. The new updated business strategy of the port company will be specified during this year, and it will remain in place until the end of 2025.

Situated by the smallest city in Finland, the Port of Kaskinen has successfully invested into the modernisation and development of the cargo port functions for years. Port of Kaskinen is part of the EU’s TEN-T railway network. It is a route for oversized loads and is situated as a logistical nerve centre in between the ports of Pori and Vaasa. According to the growth predictions of Finnish and Ostrobothnian exports, the strategic location of the port is important. It is a significant port for exporting forestry industry products and belongs to the growth corridor of the Southern Ostrobothnia and Suupohja region. Some 40 percent of the entire Finnish goods export traffic is exported via ports on the west coast. 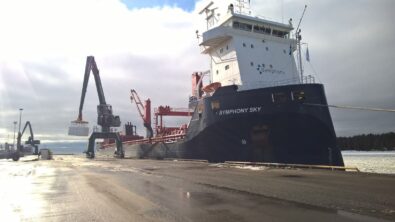